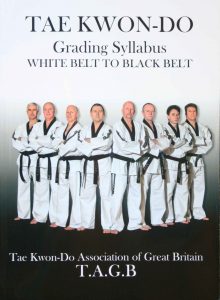 The TAGB has a carefully structured grading syllabus that introduces new skills and techniques to students at regular intervals.

As training in Taekwondo progresses, the student has the opportunity to undertake regular gradings, being awarded with a new colour of belt and promotion of rank if successful in demonstrating the necessary requirements.

This system of setting goals, working towards them and achieving them- is a healthy way to train and although gradings are optional, the vast majority of students enjoy the challenge and reward associated with the grading and belt system.

The minimum training time to achieve your black belt is 3 and half years, but this is not a target time – Taekwondo is a personal thing, and you can take it at your own pace, with no pressure to grade.

A student of Tae Kwon-Do who has been awarded a TAGB black belt has shown years of dedication and perseverance.

They have demonstrated that they can perform advanced techniques including line work, set sparring, patterns and free sparring.

However attaining your black belt is by no means the end of the road!

As a recently graded 1st Dan Black belt you can then work towards you higher Dan Grades – 2nd dan, 3rd dan, etc.

Attaining your black belt also allows the wearer to practice the Destruction element of Tae Kwon-Do:  Using bare hands and feet to break objects such as wooden boards, showing the perfect application of technique, mental focus and power.

As a TAGB Black Belt  you can then undertake other qualifications including becoming an Umpire, Referee and Instructor.

Using coloured belts is a fairly modern idea. Originally all students wore white uniforms with a white belt around the waist. These students trained hard, sometimes for hours at a time, learning how to fight, using their hands and feet as weapons to defend themselves. After months and years of practising, their white belts, which were never washed, became soiled and darkened in colour. This became a visual sign of the amount of training and experience a student had and why the black belt symbolises an expert in the arts.

Training today is very different, students generally train indoors and their belts are not exposed to the elements that would automatically darken them during the course of their training. Therefore a system of coloured belts has been adopted imitating this progression from light to dark, appropriately distinguishing students based on their level of knowledge, experience and skill.

I really enjoy Taekwondo and the reason I started was so I could learn to defend myself. Plus it is good fun and I could help others to defend themsel… END_OF_DOCUMENT_TOKEN_TO_BE_REPLACED

As a parent of a lively 10 year old boy, I feel DS Taekwondo is the perfect activity for my son. Twice a week he enjoys channelling his energy into le… END_OF_DOCUMENT_TOKEN_TO_BE_REPLACED

George likes TKD because he learns new skills and made many good friends. He started because he wants to get a black belt and he really enjoys it. UP … END_OF_DOCUMENT_TOKEN_TO_BE_REPLACED

I really enjoy TKD because it is very fun and I learn to defend myself. I would like to achieve my black belt. I would tell anyone thinking about TKD … END_OF_DOCUMENT_TOKEN_TO_BE_REPLACED

Our son has been training since April 2016. When he started he had low self esteem and struggled with attention and focus. The discipline and learning… END_OF_DOCUMENT_TOKEN_TO_BE_REPLACED

We enrolled our son after a recommendation from another student already at the club. We are very happy so far and so is our son. I  have found that m… END_OF_DOCUMENT_TOKEN_TO_BE_REPLACED

I brought Anna to TKD to help her develop strength. The final aim is that she can defend herself when I am not there for her. Anna now has a better ap… END_OF_DOCUMENT_TOKEN_TO_BE_REPLACED

Taekwondo gives me the chance to learn self defence in a friendly, fun and structured environment. Thank you!

I think DS Taekwondo is good because it combines discipline and fun and teaches me self control.

DS Taekwondo is a well organised and structured club which provides excellent tuition to all its students. It teaches core skills to children includin… END_OF_DOCUMENT_TOKEN_TO_BE_REPLACED