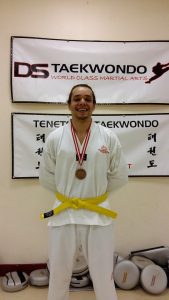 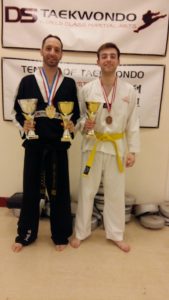 So the first National comp of the year kicked off 9am sharp at Worcester Arena on March 12th 2017.

Eden Wallace and Luke McGillicuddy were the only entrants alongside Mr Shillabeer but both performed well. Eden won his first fight against a rather wild opponent in the heavyweight division but narrowly lost his second fight and just missed the medal positions. Luke had a smaller division in the welterweights and after a bye was straight into the final! Victorious over his opponent he continued his winning streak from the Midlands and is now English Champion! Both lads teamed up for the tag team event and secured a bronze in that too.

Mr Shillabeer was still recovering from shoulder injury so no sparring events but he became triple English Champion…. winning the 4th Dan plus patterns event, the foot power event and the Grand Champion Power event too.

A good day out all round!

I love TKD because when we learn and practice our moves we do it in a fun way. I started because Mr Shillabeer came to our primary school and a load o…

When looking for a club I liked the openness and friendly atmosphere at DS Taekwondo. When I brought my son along, he was nervous but Mr Shillabeer ha…

Will Henwood (student himself and father of Rowan, age 6 also)

I started TKD after taking my 7 year old son to his lessons. I’ve never done any martial arts before my interest was sparked after seeing what was goi…

I found out about the club from the banner outside the hall, and then looking at the website. Zane was at a different club before this one, but I didn…

As a parent of a lively 10 year old boy, I feel DS Taekwondo is the perfect activity for my son. Twice a week he enjoys channelling his energy into le…

Our son has been training since April 2016. When he started he had low self esteem and struggled with attention and focus. The discipline and learning…

I like TKD because it could save my life by defending myself from bad people. I started because I wanted to make new friends. I want to achieve a blac…

I like TKD because you have fun while learning new moves and self defence skills. I started because if you get attacked you can do your moves and stay…

My two daughters have a great time at DS Taekwondo. The eldest started 18 months ago and is half way to being a black belt. They both really enjoy it …

Ged Morris - Daisy and Connie Morris, ages 7 and 5
Scroll Up